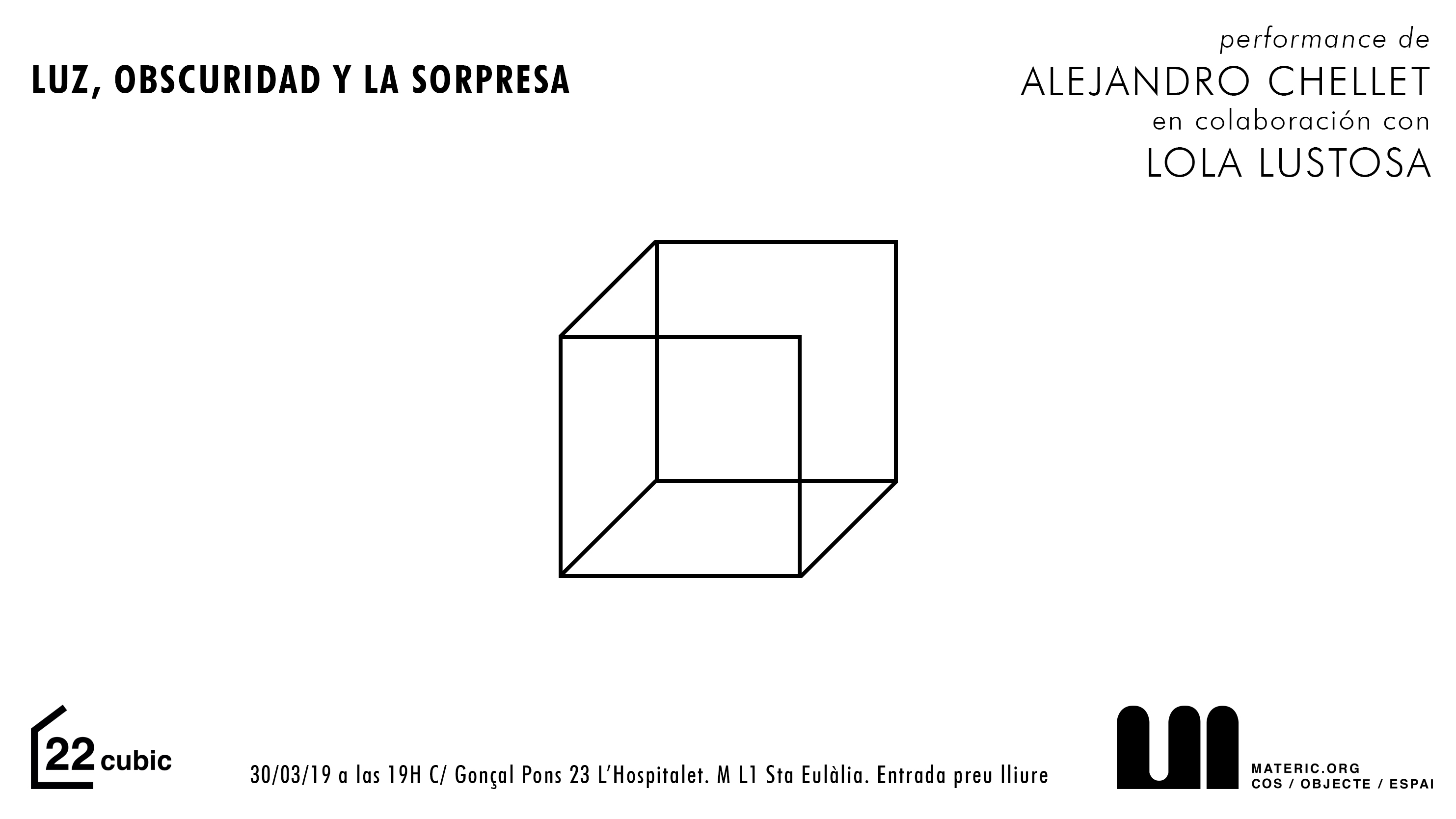 Posted at 17:44h in Activities, News by Materic 0 Comments

We invite you to the performance by Alejandro Chellet (Mexico), selected for the artistic residency 22cubic.

i stay inside for many hours isolated in the dark room with no contact to the outside world and no light stimuli apart from the visions that i will seek from my inside.
How far can we go? Where does our body, spirit and mind ends? What exists at the edge of everything? Is there such thing as body’s limits, gender limits, lifestyle limits, perception limits and even the limits of love itself?
The interface between things is where the most interesting events take place. These are often the most valuable, diverse and productive elements in the system. Applying this permaculture principle while analyzing love makes me want to explore the margins of the embodied love, the margins of love as an attachment, the margins of love as attraction to a situation, a place and even to someone else body and soul.
Light, as the essence of life and the source of growth. I explore how light affects living beings in a positive way and brings joy to us.
Darkness, also as a departure point for life or dead. I look at the fear related to the idea of darkness as nothingness and emptiness.
Surprise, the factor of destiny or karma, looking simply at the way life is based on unexpected situations. I reflect on how unexpectancy can also be seen as opportunities in every new step we decide to take on. How to use change in our benefit, to also be resilient to the surprise factor.

Multidisciplinary artist and social practitioner on cultural and permacultural networks. Born in Mexico City from a family of artists. Currently he works along with the audience, public space, architecture and performance. On his art he addresses the misplaced core principles of coexistence, the loss of connection with Nature cycles, and the political and environmental context of urban societies. In 2013 he presented an urban intervention addressing: love, altruism and community during the 8th Encuentro of the Hemispheric Institute in Sao Paulo. In 2014 he performed in NYC at Grace Exhibition Space offering a feast with dumpster food and collected donations that he burnt. Since then he has also been involved in building Rosekill, an artist residency in Rosendale, NY. In 2015 he awarded the Adidas-Border grant in Mexico City and exhibited at Museo Universitario del Chopo a collaborative mobile urban intervention: Actualiza Arte made with DIY bamboo bikes and trailers, a geodesic dome and solar powered sound system. In 2016, he scavenged food waste in the streets of Brooklyn and performed Buried by Broccoli at the Art/Life Institute in Kingston, NY. In 2016 he was in residency in Catalunya at L’Olivar Foundation where he developed The House of Fire a pavilion paying homage to the greater spirit of Fire. In 2018 he was part of EMERGENYC program from the Hemispheric Institute of Performance and Politics of NYU guided by George Emilio Sanchez focused on the theater of the oppressed techniques. Also participated at Body Politics program directed by Jill Sigman at Gibney Dance Studio focused in somatics and social change.

Brazilian artist, performer and filmmaker based in Berlin. Co-founder of Musterzimmer and Broken Loop Collective. Since 2011 she has participated of Plataforma Berlin Festival as producer, sponsor, and/or artist She has presented her videos in a number of festivals and taken part in exhibitions in Rio de Janeiro, São Paulo, Berlin, Paris, Stockholm, Helsinki, Rome, Mexico City, and Hong Kong.
Lustosa uses mostly time, light, space improvisation and the movement of the human body as inspiration for her work. “Theatre as a martial art” is her way to express her personal urges in life towards our future. She has developed an interesting point of view about social dialogues and social memories, from Brazilian shamans, natives, Tropicalismous, samba references to old mythology, and new underground western crafts.